It's Curtains for You! 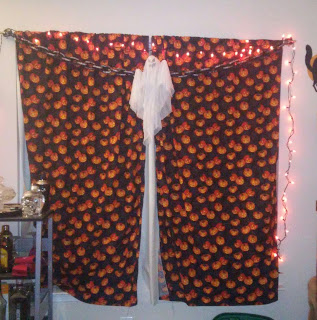 Last week, I decided on a whim that I need Halloween curtains for my living room.  I ran out to JoAnn's and picked up the only kind of fabric that had eight yards on the bolt, which was this pumpkin print.

Simple curtains, I just hemmed the edges and sewed down a pocket at the top for the curtain rod.  Still took two hours to make.

As requested, I've written up a post of my trip to Germany.  It's very picture-heavy.  It was very hard to limit it to just these few, because I quite literally took hundreds of photos.

We headed to Karlsruhe our second day in Germany.  (We landed in Frankfurt, but I didn't get any pictures.  We went to the Goethe house there though.)  This is from the Baden State Museuem in the Karlsruhe Palace.

Lots of stuff from the ancient world to the modern in this museum.  I went ga-ga over the Egyptian stuff, as expected, but I thought this would be appealing to my readers.  Death-themed imagery was everywhere, which kind of makes sense when you face years of The Black Death.

The next stop for us was Stuttgart.  We only spent an afternoon here, mainly walking around town.  This is the Wurttemberg State Museum, which was closed (unfortunately).

After Stuttgart, we headed to Ulm.  We went to the Bread Museum in the morning, which was more interesting than it sounds.  Einstein was born here, but his house was destroyed.  This memory stands in its former place, which is very close to the main train station.

We took the train to Munich and immediately changed into our trachten.  I had planned ahead for the weather (it was miserably cold) and wore a wool shirt under my dirndl blouse.  I also wore the heavy socks I purchased there, along with my sweater.  I was still glad of the coffee house at Oktoberfest, with some pretty decent hot chocolate.  That was the highlight of this event.

From the Deutsches Technology Museum in Munich, a gondola from Italy.  I called it a goth-dola.

An Enigma Device from the same museum!  One of my Master's degrees is in crypto, so I really geeked out over this.  I even gave an impromptu lecture on the subject to a couple of tourists who were interested in how it worked.  I'm not ashamed.

The Munich Glockenspiel.  We stopped by the on the way to the train station.  Unfortunately, we didn't get to see it in action.  The size of it was overwhelming.

We spent the next night in Fussen and then rented a car to head to Schwangau.  It was very tourist-y and well-polished.  We took a hiking trail up to Frauenstein, which was a memorial to a former castle.

Neuschwannstein was built by the sorta-loony Ludwig II.  Supposedly Sleeping Beauty's castle at Disneyland is based on this one; doesn't seem like a stretch at all to me.

No pictures of the inside were allowed.

I got a sunburn here.  Only I could get sunburned in autumn while wearing sunscreen.

Ettal Monastery is nearly 700 years old.  We went here mostly because my boyfriend wanted to buy some of their blueberry liqueur.

Our hotel in Ettal was across the street from a cemetery, right next to the monastery.  This was the view from our window.

More death imagery, from inside of the monastery.

We had lunch here in Oberammergau.  No joke, there was garlic hanging in the window.

Werdenfels Castle dates from 11-something.  It lies in ruins near Garmisch-Partenkirchen, overlooking the Alps.  And you can just crawl all over it, no safety ropes or guards or anything.  I wish we had taken a picnic up here.  It was just so beautiful and peaceful.

Zugspitze is the highest mountain in Germany.  This was one of our main destinations on the trip.  Unfortunately, we started too late to make a serious summit attempt, but we had a nice hike and a lovely day.

We didn't stay there long, but from what I saw and experience, I really liked Nuremburg.  After our breakfast (I swear I ate half a pound of cheese), we headed to the Germanisches National Museum.  We didn't get to stay long, because we had a train to catch, but there was all sorts of wonderful medieval exhibits.

These doors reminded me of Labyrinth.

This was near a fountain in town square.  The poem basically amounts to "sometimes, love stinks".

Of course we went to visit Nefertiti in Berlin!  We weren't allowed pictures (again).  So this is a bust of her and Akhenaten in the next room.

The staff here was really cranky.

The next stop was Hamburg.  This shot is the medicine chest of a ship in the International Maritime Museum.

We stopped briefly in Bruhl to see the Tim Burton exhibit at the Max Ernst Museum.  Yeah, no pictures allowed.

So that was my whirlwind two weeks in Germany.  I am happy to be home, just because it means I get to sit still for five minutes.

I initially started writing this post on my phone while on a train from Frankfurt, and I finished it on my computer, so I apologize for any weird layout issues. 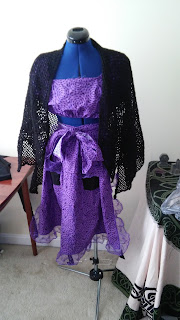 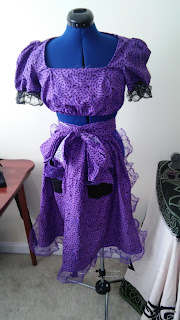 I used Burda 7057 as the pattern for my dirndl.  Burda is a German pattern company, though they're owned by Simplicity.  A couple of other pattern companies had dirndls, but they weren't nearly as good.  I wasn't really concerned about being perfectly authentic since I was using bat fabric, but I didn't want it be poorly fitted and look like a cheap costume.  Burda actually has their dirndl patterns with the regular dresses, since it's perfectly acceptable to wear them to weddings and such things in Bavaria (sort of like a kilt).

This pattern is labelled "young", which I'm guessing means it's marketed towards juniors, though it seems to use standard adult sizing.  I checked and double checked the measurements to make sure they were comparable. 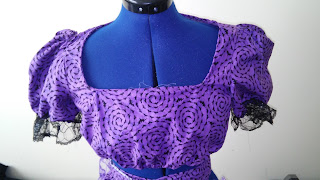 The first things I made were the blouse and apron.  I had only two yards of fabric and the pattern calls for nearly 4.  I mostly made it work, though the ties for the apron aren't solid pieces.  I started off making the pieces perfectly matched, but I was using three or four pieces per tie.  So by the end, I didn't care as long as they were the same grain (and I can't guarantee they were).

I didn't alter the blouse except to add the bat lace around the end of the sleeves.  It had been sitting in the stash for years.  Seemed like a perfect occasion to use it.  I only changed the apron by adding lace and pockets.  I should have made them a bit deeper (I have a GIANT cell phone), but they did the job.

I didn't bother with my usual alterations on the dress (shorten the straps and lengthen the skirt).  This was mostly due to indifference on my part.  No alterations were made here, except that my hooks weren't too traditional.  It was a bit snug in my apparently voluminous rib cage (a problem I have experienced more than once), but I expected this and didn't sew in the lining until I'd checked the fit, to give me room to let out the seams, if need be.  The bodice was supposed to be interfaced, but I skipped it, due to not needing more bulk on my middle; I would have under-stitched the lining, but this was when I had reached the indifference phase of the sewing.  And of course, this didn't fit on the dummy. 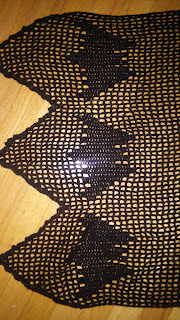 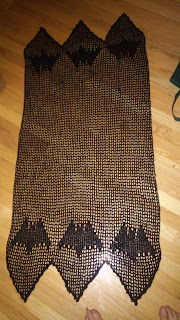 The crowning piece here is the shawl.  I've been crocheting on and off for about six years.  I've never been very good, and mostly made the little amigurumi toys for my niblings and friends' kids, but most of them are past the age where such things are appealing.  In the past year, I've spent a lot of the time I would have been sewing doing crochet instead.  It was hard to motivate myself to get off the couch, but having my crochet bag sitting right next to the couch meant I didn't have to.  So I wrapped myself in a blanket, put on some Netflix, and got to work.  By my count, I've made five scarves in the last year, one of which was fifteen feet long (it was a Tom Baker scarf).

Anyway, not a very good crocheter.  I started this shawl in March, before we had even seriously discussed going to Germany.  I wanted to try my hand a filet crochet and had a pattern for a bat curtain in my crochet book (The Happy Hooker).  I kind of threw the shawl pattern together without really knowing what I was doing, but it worked.  It took me five months to finish the damn thing, but I spent two of those months with my arm in a cast, and it is over six feet long. 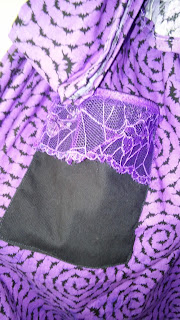 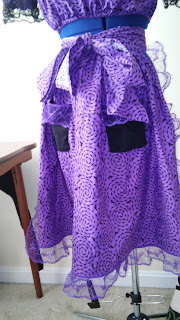 In Germany, I ended up buying the traditional thick knit socks to wear with it, which came with a cute little stein on a ribbon.  It got lost at Oktoberfest, so I plan on redoing it with leftover ribbon from the lacing on the dirndl and a bat charm.

So how was the pattern?  Burda's intended audience is people who know what they're doing, not beginners.  A lot of the instructions are given in one step, with no picture, whereas it would be three or four steps in Simplicity, each with an illustration.  I've only ever done one Burda patern before, and that was a tuxedo, and likely far beyond my skill set at the time.  This pattern is rated at 2 out of 4, and I would agree with the caveat that if you aren't accustomed to reading Burda patterns, you're going to spend a lot of time figuring out what to do.  So it isn't hard, it just takes some time to learn how to read the pattern. 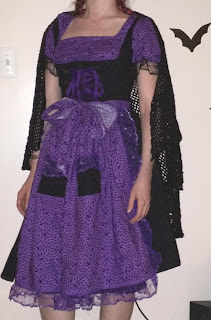 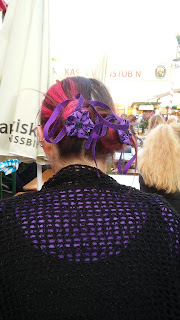 I should probably mention how Oktoberfest was.  It pains me to say it, but it wasn't so fun.  I wouldn't go back.  The people who worked at our hotel in Munich said that it has become all for tourists in the last few years, and more of a frat party than a celebration of Bavarian culture.  Additionally, apparently my dirndl wasn't seen as fun and quirky, but confusing and weird in a bad way.

Overall, I did have a great time in Germany and would be happy to go back when it isn't Oktoberfest.  Would my readers be interested in my vacation pictures?