Owl Be Seeing You

Note: I wrote this post in December and didn't get around to adding the picture until now.  Sorry.

I am a bad aunt.  My niece was born in October in 2015 (shortly after I got back from Germany).  I had purchased the fabric for her quilt several months before I left, but between making my dirndl and prepping for Halloween, there was no way I was going to get it done before she was born.  I figured no big deal, it would be a gift for her first Christmas.  Nope.  Okay, first birthday. Nope.  Second Christmas?  Yes, if for no reason than guilt!


Her mother (my sister-in-law) is obsessed with owls, and decorated the nursery in that theme, so that was the fabric I picked for the quilt.  (Note: my brother, as is the whole family, is obsessed with Star Wars, and received several gifts on that theme at their baby shower.  The number of people who said things like "you can't use Star Wars stuff with a girl!" is really, really disturbing.)  Anyway, my choice was Riley Blake's Happy Harvest, in blue, brown, and green.  I used plain white muslin for accents. 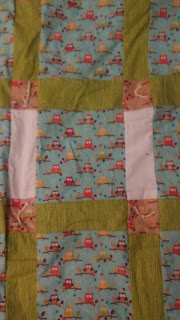 Once I finally got off my lazy butt and got around to putting this together, it came together pretty quickly.  I generally do patchwork quilts with rectangular patterns, because I have a limited amount of patience; this is a variant of the nine patch.  I tied, rather than quilted, this project.  I think I accomplished this in two afternoons, spending the second one streaming Dirk Gently's Holistic Detective Agency with The Boyfriend. 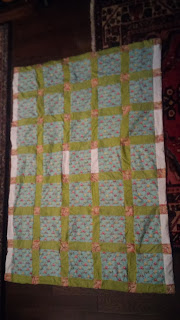 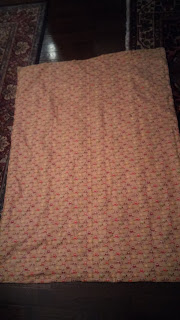